Actor Idris Elba is tackling what could be one of the greatest challenges of his professional career. It is an amazing change of direction British born Idris. He became famous for his superb portrayal of Russell ‘Stringer’ Bell in the HBO hit series “The Wire”. Now though, he is training to compete in a professional Muay Thai Fight. Hackney born Idris Elba has constantly been linked with the James Bond gig in the future. However, this is a million miles away from the preparation needed for that role. 007 fans shouldn’t get too excited yet though, only last week Elba, speaking on Good Morning America, described the rumours as the “wildest rumour in the world”.

He is training with top welterweight kickboxer Buakaw Banchamek, and in addition is having to hit the gym for intense weight training sessions. It’s all in order to become a professional fighter for a three part Discovery Channel documentary. In addition to Southeast Asia for the show he will travel to Japan, Cuba and South Africa. It will culminate in a professional bout later this month and will be broadcast next year.

Idris Elba has been incredible successful in recent years, he was highly acclaimed for his role in the Baltimore-based series “The Wire”.  He also achieved great success in many films and recently as the eponymous genius detective in the BBC series, “Luther”. His appearance in the ring in Thailand has caused quite a stir as fans

The training has seen a dramatical change in Elba’s appearance. The pounds have dropped off and the muscle gone on. Working the pads with Buakaw Banchamek he looked a different man to the one movie fans are used to seeing. Of the challenge he said, “”It has been a lifelong ambition of mine to fight professionally. Entering the ring to further test myself as a human being is a challenge I have been looking to take on for quite some time.”

Only time will tell whether or not at 44 years of age, this is a challenge too far. We wish him luck and anything that raises the profile of Thailand and Muay Thai Boxing can only do could for the country’s tourist trade. Let’s face it, it’s taken a bit of a hit of late. 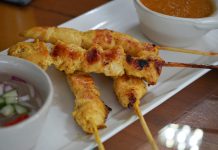 Traffic accidents down in Vietnam, though still cleaning far too many lives

Indonesia heads the foreign direct investment for the region