Taco Loco was Saigon Outcast doing what they do, oh so well. A terrific atmosphere, great music, great beers and Tacos from all quarters of the city. With no less than 9 sellers offering their take on this Mexican favourite, it was never going to be possible to review them all. Music, whilst we were there, was provided by Macumba. Lead singer Jo Fuentes is cropping up in various guises all over town and building an amazing reputation for herself. It is thoroughly deserved. One of her other bands, Los Mosquitos are a firm favourite of mine.

Huge Congratulations to Angela Rose for this Amazing Event.

My first attempt fell foul of classic Vietnamese lack of service. I went to the Anan stall ordered a fish taco and duly paid the VND35,000. The girl took my money a pushed a stale looking specimen, that was sitting on the table, at me. As I picked it up it was stone cold. I politely refused it saying that I wanted a fresh one, not a cold stale one. The young girl looked terrified and turned to the bloke next to her. He point bank refused, saying I had to either have the cold fish one or order something different. I ordered my money back. Great work Anan, terrific customer service.

Next stop was Gringo Tacos, this was more like it. I had a chicken taco and it was excellent. Packed with chicken, salad, tomatoes, sauces and guacamole. It was hard to eat without a spoon and fantastic value at VND35,00. The service was pretty quick as well. This was starting to look like a really good evening.

Next up was Anita’s Cantina. These guys had been so busy that they had completely sold out and were preparing a whole new batch from scratch. People had been raving about these so we ordered in advance, took a seat, caught a beer and waited. I had what they describe as a Hanoi style spicy fish taco. The fish and taco ere both really good, though there was not much else, no salad or salsa etc. Still it was a great taco.

Just before 7.00pm organiser Angela Rose hot the stage to announced the winners that had been chosen by a panel of judges.

These announcements gave us a welcome break to allow the food to digest before we took on the second bout of taco tasting.

Among all the vendors here at Taco Loco, These were already well known to me. Since Peter Holdsworth opened his stylish restaurant on Xuan Thuy I have visited quite a few times. The atmosphere in the restaurant is excellent as is the food. So it did not surprise me that they picked up two prizes in the categories. I went with the beef variety and it was terrific. AT VND50,000 they were more expensive than the others but were well worth the extra. Large chunks of succulent spicy beef, in an excellent taco. Again for me I prefer salad and salsas which were lacking. I am though, prepared to accept that late in the day they might have just been running out.

Matt Ryan has been carving quite a name for himself with his fabulous Union Jack’s Chippy in downtown District 1. His British / Mexican fusion tacos caused quite a stir here. Soon picking up the monicker Brexican Tacos, he offered Battered Sausage Tacos and Fish and Chip Tacos. Opting for the sausage option it was a great mix of an almost coleslaw salad with a battered sausage. This combination worked really well, though could well be a little greasy for true aficionados. It was, though, a great take in the true spirit of this kind of event. The judges commented that Union Jack’s sausage taco was a huge hit with them, and that it should have had its own category.

Taco Loco did a fabulous job. Obviously it would have been impossible for me to have tried all the tacos, there were more than 25 different ones on offer. So, apologies to the businesses that didn’t get a mention here, it was merely time and waistband restraints.

Admission was VND50,000 which provided one free Saigon Red or a bottle of water. Which was great value. 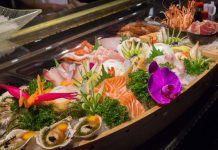 Some of our Dangerous Asian Animals

INDONESIA NEWS: Can The Fires be stopped permanently

Exclusive: Vietjet to launch flights to Australia from Vietnam