The towers that surround the gigantic Landmark 81 range between 37 and 52 storeys and between 137 metres and 184 metres in height. They are absolutely dwarfed by the world’s 14th highest super skyscraper that rises from the banks of the Saigon River, 461 metres into the air. It is hard to believe that the previously highest building in Ho Chi Minh City, The Bitexco Tower, is little more than half the height of this giant, at 264 metres.

The complex in general and the Landmark 81 tower in particular has split opinion, that’s for sure. For some it’s a beautiful addition to the Saigon Skyline, for others it’s an unnecessary concrete and glass monster. I sit in the middle. I’m a great fan of super skyscrapers; they make a statement. This is a fantastic architectural achievement. Built on Saigon’s notoriously swampy soil, it announces itself and indeed Saigon to anyone arriving on the Hanoi Highway. In fact, even from the runway at Ton San Nhat International airport it dominates the skyline.

The grand opening was on Friday night 27th July. They have been testing the LED lighting system each night over the last few weeks. Landmark 81 is a shimmering, colourful giant that is visible from almost anywhere in the city. The colours change and the design is a constant moving light show.

The statistics of this building really are breathtaking. 81 floors above ground and 3 below offer mixed development. There is a skating rink, cinema and commercial centre. Luxury apartments take up the floors from 6 to 40 with accommodation ranging from 1 to 4 beds. The Vinpearl 5-star hotel has its reception on the 42nd floor with rooms going up to 76 floors. There are observation decks on floors 79, 80 and 81.

The building which is the 14th tallest in the world, boasts no less than 26 elevators. It is for now, the highest building in Southeast Asia. Though Kuala Lumpur, having lost that accolade with the Petronas Towers are planning to take it back. Landmark 81 is constructed like a group of many skyscrapers joined together each ending at a different height. As each ends there is a roof garden.

Love it or hate it, it has changed the Saigon skyline forever. At night time the light show is a glittering blaze of colour that dominates the skyline. I certainly look forward to taking a peak at the city from the 81st floor when I get the chance. Judging by the crowds that were pouring in on Saturday morning, it is going to be busy for a while. The locals are really taken with it and the crowds were absolutely massive. 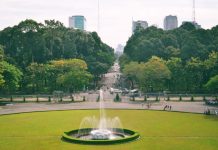