Thai and Indian food in Saigon, at the same venue? This is the best news in a while, Babaâ€™s my favourite Indian restaurant in Ho Chi Minh City have opened a new outlet in the Elephant Garden at 232 Nguyen Van Huong, Thao Dien, District 2. This is great for me, their unbeatable lunch deals have become a regular feature in my life. However since all the major construction in District 1, it has become something of an obstacle race for me to get across town for a lunch break. Now they have teamed up with the Thai restaurant that is already there.

Robin Deep and his staff have the Indian curry thing nailed, Iâ€™ve never had a bad dish there and they have some truly mouthwatering items on the menu. Babaâ€™s have been presenting some fo the best Indian food in Saigon for a while now. Â I look forward to adding Babaâ€™s in District 2 to my regular lunch time restaurant venues. Frank and his team opened Elephant a while ago, but this idea of two restaurants with separate kitchens sharing the same tables and bar has to be a winner. Itâ€™s a great idea.

To launch the new restaurant Babaâ€™s and Elephant put on a joint event and invited friends and colleagues to a grand opening Buffet, set in the wonderful outdoor venue that they have secured. It started at 6pm and bang on time the heavens opened and Southeast Asiaâ€™s Monsoon started dumping. They have great canopies that can be opened at the drop of a hat, but it surely kept people away who would otherwise have been here. I had originally arranged to come at 7pm but saw the storm developing and got here an hour or so early

The Rain Did Not Stop the Fun

Rain or no rain, the banquet was here to be enjoyed and I dived in. It was a magnificent spread with about 20 different Indian and Thai curries and other dishes to sample. Personal favourites for me: as always I am a fanatic for Indian breads and the naan were perfect. I love the Thai chicken with cashew nit and of course the red and green Thai curries. I liked the Indian fish curry and the pilau rice. There were a couple of outstanding chicken dishes and plenty for the vegetarians. The rain dropped in biblical proportions for about an hour and then slowed to what the west would call a down pour. It didnâ€™t prevent a constant stream of taxis arriving bringing guest, all ready to wish Robin, Frank andÂ  their teams the best of luck.

I really hope this place succeeds. Robin is a friend and a great bloke, I wish him every success. Getting Thai and Indian food in Saigon and right on my doorstep is a huge plus. This part of town needs a lift as well, itâ€™s further down Thao Dien than most of the nightlife, but has the very excellent Evitaâ€™s as a close neighbour. This new venue will delight people who live at this end of â€śthe villageâ€ť. 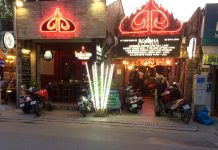 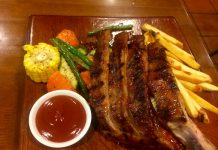