Hanoi to Yangon flights are now a reality with Vietjet have announced their latest route; between the two great Vietnamese cities. The announcement was made at an opening ceremony in Myanmar. This is an important route as it is the first direct flight between the two countries. Previous travellers had to go through Bangkok.

This is expected to be a very popular route as demand for travel between the two Southeast Asian countries is already hit and is growing steadily. You will find the Vietjet Booking page, here.

Hanoi of course is the capital of Vietnam with itsÂ Noi Bai International Airport serving a possible 25 million passengers per year. The airport located 35 kilometres to the northeast of the city is the largest in Vietnam. Hanoi is a fascinating city with its Old Quarter being the focus of much of the tourism industry. Recent slacking of local licensing laws have seen the city really come alive at night these days.

Yangon, the former capital of Myanmar until 2006, when the government moved that status to the purpose built city ofÂ Naypyidaw. Formerly known as Rangoon itâ€™s name means “End of Strife”. It has a population of over 7 million and is developing intoÂ one of the busiest tourist cities in the region.

There will be daily Hanoi to Yangon flights and return fromÂ  August 31, 2017. The flight time is 1 hour 55 minutes. 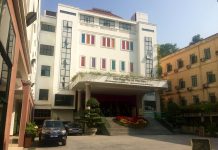